Economic Survey coverage on IT Sector and Exports

Every year we have two events in financial year end which attracts every one right from Industry, Agriculture to common man of this country. These are annual budget of Govt. of India and preceding the budget the Economic survey. The Chief economic adviser who keeps an eye on the Economy of the country round the year and advises the Govt. on right policy formulation, presents the Economic Survey year, which is both the stock of performance of the Economy as well as a guide to investigate future, especially setting the thought process for the budget.

This year’s Economic survey was very important from the perspective of having come after two consecutive events in short term, the Demonetization effect + GST. This year’s economic survey also moved ahead from “digital economy” theme. The word digital finds only a lip service in certain places in volume II.

The information technology sector has been an important sector of Indian economy for last 2 decades. This write up is a synopsis view of how Economic survey has projected the performance of this sector vis-à-vis the rest of economy.

On overall terms, Chief Economic Advisor(CEA) is very optimistic and has projected a 7+% growth in GDP in next one-year time frame. He has rightly quoted the positive indicators from International rating agencies of Moody’s upgrade of India’s ranking and a jump in world banks ranking on Ease of doing business.

The “Software” and IT is covered under “services” as the balance of payment accounting accounts “Software” under services and non-factor services balance. This accounting entry in current account balance has consistently performed for years for India. The following chart is self-explanatory on this. 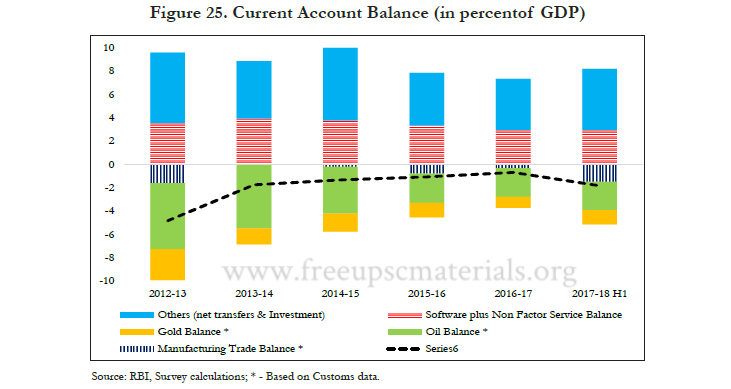 Almost every Government record uses the terminology IT-BPM to aggregate both IT services and ITeS exports. Software forms part of IT exports and it is difficult to estimate the Software product exports in this category as it includes mix of various reporting.

In India there are two sources of data for Software exports. One from a RBI data based on remittances reported under specified codes and secondly from data and analysis reported by NASSCOM, STPI and Jurisdictional SEZ commissioners.

The interesting difference in this year’s Economic survey is the data reported by RBI and NASSCOM is in two different directions. Usually both do not match. This year RBI reported a negative (-)0.7% in 2016-17 growth in exports, whereas NASSCOM registered a 7.6% growth in exports.

Another interesting chart from economic survey reporting from this sector is a report from world bank data base. The chart given below depicts that India, Israel and Philippines as top players in ICT exports to the world. It is common knowledge that Israel’s exports are based on their competitive advantage in Software products, India in IT Services and Philippines in BPO. Israel a small country export levels using product as a base are higher than India’s in IT services. It goes without saying that India needs to shift its strategy in the sector and give emphasis to products in its ICT portfolio. 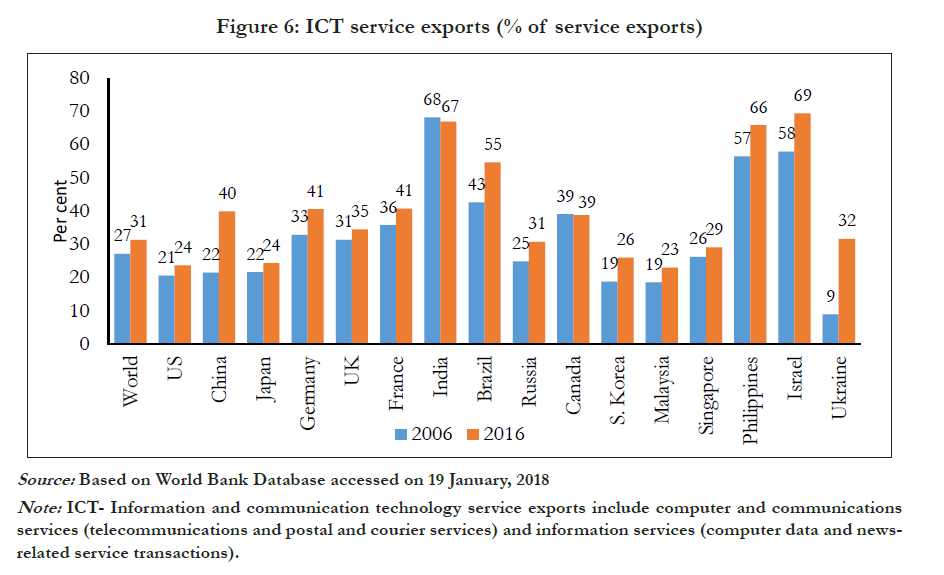 FDI inception in the sector can not be estimated separately from given data. However, FDI in overall services sector (of top 10 service sector) had a share of 65.8%. in April-October 2017-18.

The survey also reported a robust growth of services sector to 16.2% in April-September 2017 owning to major sectors like travel and Software.

Software services share was 45.2% of overall services exports in 2016-17. (The software however in report means complete IT sector).

On fiscal policy side, GST is a new entrant in the system. GST also treats every thing that is intangible in IT as service be it is a IT Service or a Software product. As per CEA there is a 50% increase in registration of tax payers after GST introduction. This is a healthy sign for the economy and for digital transformation of economy.

With indirect tax on Software having risen from 15% to 18% there will be a larger gross value addition in Domestic market by the Software sector. Plus, increased digital adoption is expected to boost the overall domestic trade in this sector.

GST system also effects how exports are done. On export front discounting the initial difficulties exporters had, GST is expected to ease the compliance on export front as well as complexities that affected many on Place of supply/provision of services rule.

Other general announcements on Exports

Many of the India’s states are much larger than some developed countries. However, it is for first time that a comparison or detailed data on the international exports of states has been included. Also this data shows a strong correlation between export performance of states and their standard of living and affluence.

A figure from Economic survey is reproduced below.

IT is said that there is no super star exporters in India. According to survey, top 1 percent of Indian firms account for 38 percent of exports; in all other countries, they account for a substantially greater share (72, 68, 67, and 55 percent of exports in Brazil, Germany, Mexico, and USA respectively). And this is true for the top 5 percent, 10 percent, and so on.

This analogy also helps us undertand that in IT sector also there is no superstar that is ruling the globe in international trade from India. Rather in IT the spread is much wider and open. India needs to build a Google is the dream that remains to be realised for this sector, to be a true Software power.

A chat below explains this in the survey. 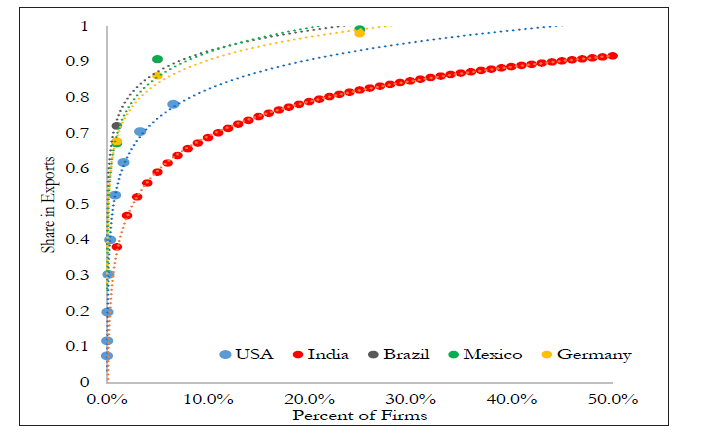 There is a clear cut challenge on economic front for IT sectors. The share of IT exports in total Services export has also been going down for last few years. Survey says Govt. is taking several steps to boost this. However, the reality is that government has yet to take right steps in changing world scenario both to boost the exports as well as growth of domestic IT industry.

Government has failed to recognize formation of a sub-sector of SaaS products and bring up new programs and schemes for promotion of Software product as a sector with in IT. iSPIRT has been continuously working to influence the policy makers to come up with a Software Product policy which can lead to announcement of a Scheme for SaaS companies and boost morals of Indian Startup entrepreneurs to stay in India and run global business from India.

With this background now we look forward for a Budget 2018.