GSP at GSTN what we know till now

Recently GSTN invited application for becoming GSTN Suvidha Provider (GSP) under GSTN for enabling much awaited Goods and Service Tax. GSTN received total 344 applications. CEO GSTN reported in GSP workshop on 25th October that about 98 of these applicants are qualified for further evaluations according to them. 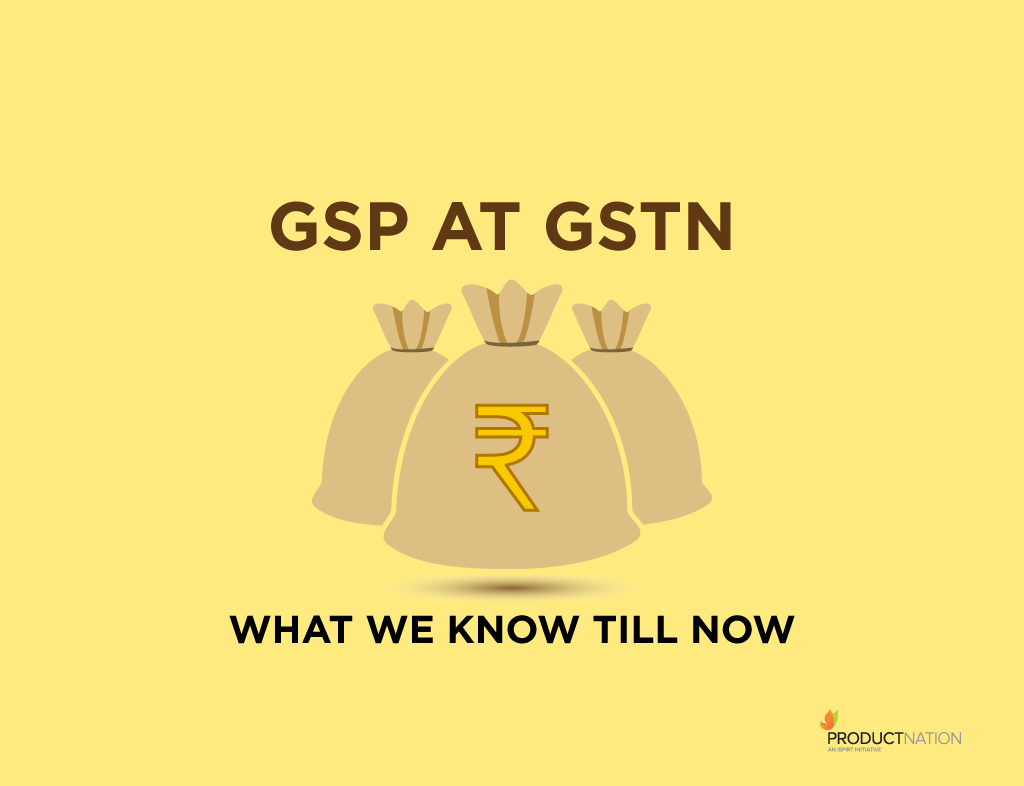 iSPIRT had proposed that instead of a heavy turnover criterion the GSTN could have used a performance guarantee or a surety bond, both to ascertain the serious players and cover the risk of fly by night operators. This would allow some startups to take the risk and succeed to become GSPs.

The announcement did not clarify what is a GSP or what role will it have in the system.

A large number of interested startups through the GSP was about an application provider of product to file and comply with GST. Hence, the above criteria were considered as a barrier to startups. GSTN although off the record said they will accept application from all and will then evaluate who will be fit to become a GSP. This was however a very subjective approach, where GSTN will use their discretion to allow an enterprise to setup a GSP or not.

These concerns and doubts created confusion in minds of many startups, who have been looking towards the GST as an opportunity to innovate and implement in the space of tax compliance with added value with analytics and business intelligence.

It is subsequent to the workshop that many of these doubts have been cleared.

What finally turns out to be is that the GSPs are the middle layer infrastructure or utility provider or a API gateway to large number of GST filing apps. There may be a mix of GSP/ASP model where an ASP sets up a captive GSP. Even in that case GSP is merely a Gateway.

This blog is to answer some of the questions raised by participants in a Google Hangout conducted by Nikhil Kumar an iSPIRT volunteer. Additionally, it also answers other basic question with the related topic of GSP.

GSTN stands for Goods and Service Tax Network. It is a section 8, not for profit private company, with shareholding of Government of India, Government of States and UTs and financial institutions.

As a Special purpose vehicle(SPV), GSTN’s mandate is to establish, develop and manage the required infrastructure, systems, technology, partnerships and eco-system for implementation of GST.

What is a GSP?

GSP stands for GSTN Suvidha Provider. GSTN does not want to facilitate or connect to Goods and Service Tax filing application (called ASPs by GSTN and in this document) directly. This is for reasons of security and scale. Therefore, GSTN has planned a number of GSPs who will act as a middle layer between the ASPs or business and GSTN.

GSPs will facilitate the use of GSTN system to the businesses as well as products and application (developed by ASPs) to file the GST returns, match sales and purchase invoices to settle tax credits. The GSPs will hence help secure GSTN from direct exposure to users on internet as well as distribute the load in a large economy like India.

A GSP will hence act as a gateway that will pass enable the pass through of GSTN APIs (application programming interface) to and from users. There are three types of GSPs envisaged:

This is how it is depicted in the above slide shown in GSP workshop. However, during the talk on GSP workshop it was mentioned that it will be mandatory for all GSPs to allow any ASP to use the GSTN APIs. Hence, it remains to be clarified by GSTN, weather the model 2 shown in above diagram means a Captive GSP and weather a captive GSP can deny access to third party ASPs to it’s GSP.

GSTN will sign an agreement with the selected GSPs which will govern the contractual relationship between GSTN and GSPs.

How many GSPs would be allowed?

There is no final decision on how many GSPs will finally exist or be allowed. However, in the first phase, 98 GSP applicants would be allowed to participate in the technical evaluation. How many will pass or how many more will be evaluated has not been declared yet.

Who is an ASP? What is relationship between an ASP and a GSP?

Application Service Providers are – Accounting Software, Invoicing Software, Point of Sale (POS) systems and other innovative applications that can enable businesses comply with GST. ASPs can work with multiple GSPs to enable GST for their customers.

Some ASPs may also have their own captive GSP. Dominant accounting and ERP product companies may have their captive GSP as this further opens up in future.

ASPs will have a contractual relationship with GSPs that they use.

How many ASPs can exist? Does ASP is related to GSTN under a formal relationship?

As per GSTN, they do not want to control the ASPs and leave this for market forces to decide how many ASPs can be there.

ASPs are not a directly related party with GSTN. ASPs will have a contractual relationship with GSPs and GSTN will ensure the GSPs provide a free and fair access to ASPs to the GSTN resources.

Can an ASP apply to become a GSP later?

GSTN , says yes they will evaluate on case to case basis. There is no defined policy. On eligible as per the criteria laid out it in the next phase

As per current information, GSTN will waive the first year charges for the GSPs. However, the GSPs would be allowed to charge the downstream ASPs. GSPs can also provide value added services on top of GSTN APIs and charge for them.

Again there is no define answer. The market will decide many things in future. For startups and small ASP players, it is important number of independent GSPs emerge for a fair and free market to exist.

As per announcement at GSTN workshop, the GSPs will not be allowed to share the GST data of businesses filing returns or sell the data to third parties. However, GSP can use this data themselves to create value added service offerings like business analytics and charge the individual businesses to do so. This means the data can be used to create a service offering for the given business only and cannot be cross sold to other parties. GSP will have to strictly adhere to data privacy clauses.

How will GSTN ensure third party ASPs get GSP services early on launch of GST?

NSDL e-Governance Infrastructure Limited (NSDL e-Gov) is the depository (promoted by NSE, now running infrastructure and services for many mission mode projects of Government of India. NSDL is also slated to run the GSTN services.

NSDL will provide the neutral GSP services as an official independent GSP to ASPs. GSTN thus ensures that at least one GSP is ready for third party ASP providers get a GSP to serve the market.

Will GSPs expose the same API set as per GSTN Sandbox?

As per GSTN answers to this questions, the GSPs will be legally bound to expose the GSTN APIs on a complete transparent pass through. However, GSP can provide additional rapper APIs for value add that they will like to build or management of their system.

Will the developer sandbox be available to anyone?

As per GSTN response, Yes.

Will there be any further workshops or hackathons?

GSTN may conduct these in the future. However, none planned as of now.

Where can one find the workshop PPT and other resources of GSTN?

One can use following resources of GSTN to get to more details.

What is iSPIRT pitching for?

At iSPIRT we are continuously involved with GSTN. Role of GST will be a game changer for India’s economy.

Our endeavour is that GSTN is able to offer a thriving platform for number of Product companies existing and new. It is also able to provide an open environment for innovation that can help some startups emerge offering valuable products to the business community.

[this blog is based on Google Hangout conducted on the topic by iPSIRT voluteer Nikhil Kumar, the inputs at GSP workshop conducted by GSTN on 25 Oct 2016 and group discussions with Bharat Goneka, Pramod Verma and Gian Franco Bonini of iSPIRT]

2 thoughts on “GSP at GSTN what we know till now”