The GST was welcomed by all as a revolutionary measure. We had covered one earlier topic, “How GST will work for software exporters”. There have been many changes in last few weeks before GST was launched in the IGST law.

Please note that “GST law” treats Software as “Service”. Hence, there may be a mention on “Software” and “Services” in mixed manner in the write-up. This write-up is just focusing on problems and issues created for exporters by the GST process. On details of process there are many blogs on internet.

After launch of GST since 1st July 2017, we came across many questions and concerns on how GST on Exports. I have been trying to write a piece on how the process works for Software exports under GST. However, the policy and process for export of “Services” was not at all clear. I have myself struggled through,  and it has taken more than 6 weeks to understand the process, raise exports invoices and multiple documentations required.

GST has turned out to be nightmare, especially for Small and medium Software exporters and will continue to do so, unless corrective measures are taken up.

Let us look into how process required to be complied, caused problems.

Being Zero-rated there is no tax or duty on export. However, being Inter-state trade (rather than being international trade) it requires payment of IGST under IGST law.

If one delves deep in to this application of IGST on exports, it clearly comes from concern of tax policy makers on “Goods”, moving in a container and a compliance assuring good reach port of export and gets exported finally. That this does not apply to services has not been thought over by the GST law makers. (the assumption may be services will adjust in due course of time)

Hence, as per IGST law an exporter is required to either

Or Export without IGST by

Filing a Bond requires submitting a Bank Guarantee to GST department up to 15% of the amount of duty applicable on estimated exports value in a given (say a year). The jurisdictional office of GST has a discretion to decide bank guarantee amount anywhere from Zero to 15%.

If the office approves zero % (or nil) bank Guarantee, the department asks a set of declarations and data of past year.

Anything that is based on discretion in regulation, also brings in corruption with it. Whereas there is news from many places that jurisdictional GST office are waving bank guarantee clause for Software/IT exports. There is also news that GST department is randomly asking for bank guarantees.

A small software exporter or a startup not having more than 1 crore of “export turnover” in past year will have to opt for either option a) Or b) from above choices i.e. either the exporter has to pay duty and get a refund or has to sign a bond with bank guarantee. 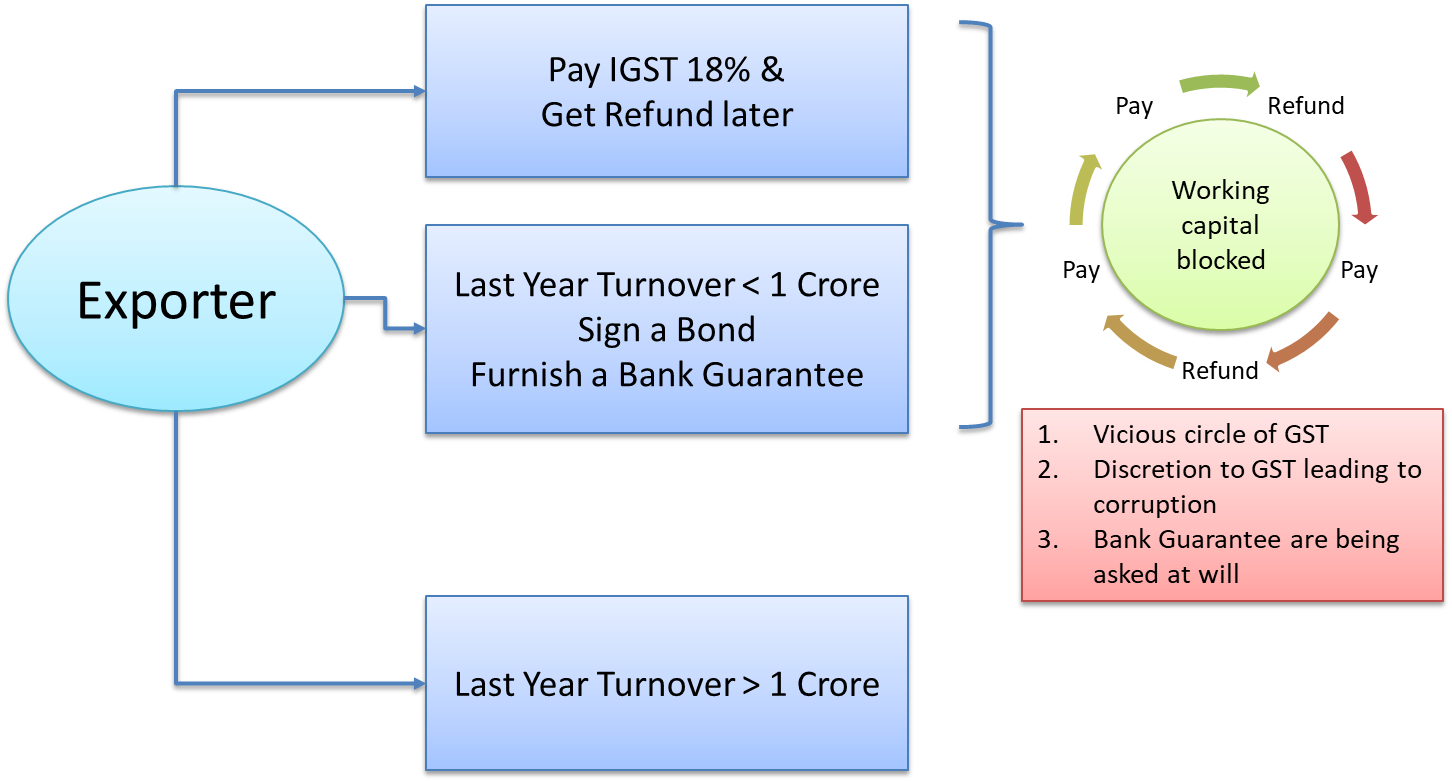 In either of the cases the IGST law locks the working Capital of the start-up or small exporter.

The GST law therefore goes against policy of Government of India to promote startups. It also is going to be regressive measure for large number of small IT companies, IT consultants and freelancers.

Anything that is based on discretion in regulation, also brings in corruption with it. For those who want to file bond, the jurisdictional office of GST has a discretion to decide bank guarantee amount anywhere from Zero to 15%.

Whereas there is news from many places that jurisdictional GST office are waving bank guarantee clause for Software/IT exports. There is also news that GST department is randomly asking for bank guarantees.

Exports before GST were never allowed to report or get clearance from Indirect tax departments. Now, GST department has become a gateway for every exporter of Goods and Services, thus extending mandate from domestic tariff area to international trade also.

What is cause of concern is this intervention of GST department is manual as against the principle of making entire GST system end-to-end digital. This give power in hands of indirect tax officers to monitor exports.

This perhaps is a fundamental error that Government of India have made, against it’s public stance on “Ease of doing business.”

This is a problem for all exporters including those with “export turnover” more than 1 crore and eligible to sign a LUT with GST.

It is more of less like traffic policing the exports on regular basis and heavily increased compliance.

GST has no focus on Software exports

The entire GST law has been written with physical Goods in mind but applied equally to both Goods and Services. Once again Government of India has made a classical mistake. It is an irony that a nation that is known to be power house of Software has not focus of tax authorities on “Software exports”.

Startups and SMEs require removal of regulatory barriers for them to grow. GST law has done just the opposite. It requires small exporters and Startups to furnish Bank Guarantees.

GST for supplying to SEZ

SEZs are deemed to be considered outside the customs territory of India. Hence, supplies to SEZ units by exporters in India i.e. DTA will be treated in same manner as exports to clients located outside the country.

Therefore, if a Startup or a Software product company is selling to an SEZ unit, the process will be same as that of exporting.

It is recommended that